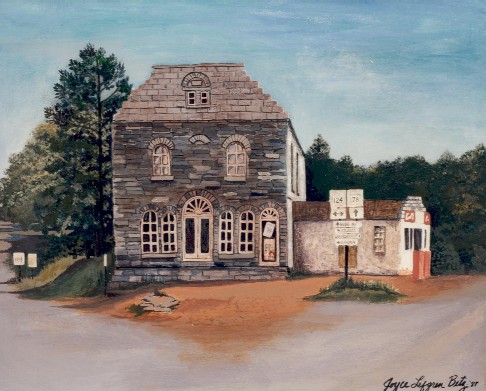 Snellville is located approximately 25 miles northeast of Atlanta and 45 miles west of Athens at the intersection of U.S. Highway 78 and Georgia 124. It has become one of Gwinnett County's fastest growing cities with a population of 20,000.

The first settlers in the southern part of Gwinnett County now known as Snellville were the Creek Indians (actually Muscogees, but termed Creeks by settlers since they lived along waterways). One of their burial sites was Lanier Mountain, just west of downtown. For two centuries residents of Snellville have found arrowheads, broken pottery, tomahawks, pipes and other evidence of the Indians' presence.

After the county of Gwinnett was established in 1818 and the land lottery of 1820, many families moved to the southern part of the county where they found rich timber, fertile soil and abundant streams. As the population increased, churches reflecting the religious backgrounds of the incoming settlers were established in the area. Zoar Methodist Church (1811), Rockbridge Baptist (1819), Haynes Creek Primitive Baptist (1826), Friendship Primitive Baptist (1833), Bethany Baptist (1848), Mt. Zion Baptist Church (1853), Yellow River Baptist (1871), Raymond Hill Baptist Church (1875) and were some of the first. The two largest in-town churches, First Baptist of Snellville and Snellville United Methodist, were constituted in 1882 and 1884, respectively.

Although people were moving to this area, there was little commercialism. Families traveled many miles by horse and wagon to purchase needed items for their homes, families and farms. 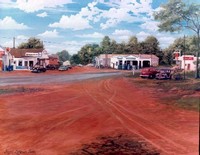 In 1874, three teenaged boys in London, England dreamed of coming to America. The young men were Thomas Snell and James and Charles Sawyer. They planned a secret voyage to the United States, but Tom Snell's parents found out about the trip and disallowed his going. Sawyer and his brother Charles left England March 18, 1874 and arrived in New York on April 1, 1874. They left New York and eventually settled in Madison County, Georgia where they worked on a farm. Thomas Snell's parents finally consented to letting him join his friends. They rendezvoused in Danielsville, traveled through Jefferson and Lawrenceville and found work just north of future Snellville on the farm of A.G. Holmes, laboring for $10 per month. After a disagreement over wages, they moved to the farm of Capt. A.A. Dyer which was located off Hewatt Road near what is now R.D. Head Elementary School. Charles left his brother James and friend, Tom, and in time settled in Alabama where he worked in the turpentine industry.

Snell was a prolific writer and wrote endearing letters to his mother and family back in England. The existence and content of these letters was unknown until 2012 when the Snell family and the Snellville Historical Society were notified that 130 such letters were kept in England for a period, sent to a relative in Wisconsin, and held in trust there for over 100 years. These letters were returned to Georgia and provided tremendous new insight into the Snell-Sawyer period of Snellville's history.

Shortly after his 21st birthday in 1878, James Sawyer left Snell, who was still working on the Dyer farm, and traveled back to England to claim an inheritance. While Sawyer was away, the entrepreneurial Snell married a local girl, was given an initial cache of groceries and supplies by a merchant in the Five Forks/Yellow River community, and began to sell these. Snell was very successful in this venture by turning and multiplying his inventory several times. Snell liquidated his stock and returned to England to visit family in April 1879. In August 1879 Sawyer and Snell returned to America together and opened a mercantile business in a small wood frame building in the SW corner of current US 78 and Ga 124. In 1882-83, the two built a large one-story rock store on the east side of 124 with rock from his Snell's quarry (Baker's Rock). These two lads were uniquely qualified to establish Snellville as a retail center, since both had worked in a large mercantile firm in London, one of the world's largest cities. Snell and Sawyer were very successful merchants taking in as much as $500 per day and drawing customers from distant communities. Their business strategies included barter, credit, and making change in 'store script' (shown here) which could be spent only in their store.

Clients traveled from as far away as Athens. The trip to buy supplies usually required an overnight stay. The only accommodation available to the travelers was a large chestnut oak grove in which the people camped. There was a well in the front yard of the Snell-Sawyer store that provided water for customers and their animals. For some unknown reason, although there are many theories, after a few years the partnership dissolved.

Mr. Snell retained his business in the granite building, and Mr. Sawyer returned to the wooden store across the street and built a two-story granite store around it over a 10-year period. According to folklore, he then dismantled the wooden one and hauled it away. The two-story rock structure was a Snellville icon until it was demolished in 1966.

In 1884, Mr. Sawyer opened the first post office and served as first Postmaster in Snellville in his wood store and then moved it to the rock store shown at right. The P.O. served Snellville until it was closed in 1907. It opened again in 1932 in the Pate Building and has served the community continuously since, operating out of several buildings.

In 1896, at the age of 39, Mr. Snell died unexpectedly in an Atlanta hospital during surgery to remove a large abdominal tumor. He was buried on Brownlee Mountain, now known as Nob Hill, but his grave was later moved to Lithonia.

James Sawyer operated his store until the 1940s when he retired due to visual impairment. He died in 1948 at the age of 91. He is buried in a mausoleum that he built in the Snellville Historical Cemetery. Prior to his death, Mr. Sawyer had a casket made for himself by a local cabinet maker. He kept the casket standing in a corner of his house.

In addition to being successful merchants, Snell and Sawyer shared two other traits: (1) they both realized the value of investing in land, and (2) they both were very generous by helping in the development of schools and churches. Sawyer even headed an effort to bring a railroad through Snellville, but it was not to be. Even though business competitors, the two men remained friends until Snell's death.

There is strong belief among some locals that the community was once known as New London, and this may be true, but there is scant proof in the written history to support that theory. Businesses and shopping centers have borne that name in honor of the city's English founders. Newcomers in the 1970s campaigned to change the name to New London, but it did not happen.

After World War II, the residents of Snellville pursued employment other than agriculture. Many men traveled daily to the Atlanta area to work in the automobile and other factories. This was the beginning of the transition of Snellville from a farming to a bedroom community.

In the late 1950s two local brothers, Jimmy and Wayne Mason, began building homes in the Snellville area. With the availability of attractive, affordable brick homes, Snellville grew more than 200 percent. Shopping centers, hospitals, schools and churches appeared to meet the needs of the growing population. The Masons were very active in recruiting doctors, dentists, grocery chains, etc. to stimulate the growth.

The first schools in the Snellville area were one-room schoolhouses, most of whom were privately operated by headmasters for profit. Prior to 1900, 15-20 such schools were recorded in southern Gwinnett. The first public school opened around 1905, was sparsely equipped, and served until the larger Snellville Consolidated School (shown above) opened in 1923, drawing students from four nearby smaller schools. The building housed students in first through eleventh and later through twelfth grade. It was a large granite structure, built from a local quarry, facing 78 Highway located on property now owned by The Brand Bank, the Krystal Restaurant and Snellville United Methodist Church.

With the growth in population the granite school added more classrooms. This addition was later used as City Hall. Many more schools were built in the area. South Gwinnett High School, Snellville Middle School, and W.C. Britt Elementary were three of the first. As of this writing, there are six High Schools serving the former Snellville Consolidated School district.

Like most of rural Georgia, Snellville was underserved medically until the early 1970s. Five different doctors practiced here at different times from 1885-1930. Most were bi-vocational, working as farmers or merchants, to supplement their incomes. The city was without physicians from then until 1956, when the extended community built a doctor's office and recruited a physician; two physicians practiced from the facility before it was sold.

Dr. Edward Bowen came here in 1971 as a general practitioner and immediately began recruiting medical specialists, and spearheading a campaign to build a hospital in the city. By the end of the 1970s, the city had attracted young specialists in cardiology, gynecology, pediatrics, urology, ENT, surgery, and other fields of specialization. Dentists Hugh and Anne Mazzawi arrived in 1969 and helped to recruit some of these new professionals. Gwinnett Community Hospital opened in 1980 with 103 beds (max). Today, the expanded hospital is known as Eastside and offers state-of-the-art healthcare. In 2015, the city issued 229 medical business licenses, with many of these firms employing multiple medical personnel.

In 2000, then Mayor Brett Harrell initiated conversation regarding the building of a new city complex. It required negotiation for a land swap between Snellville United Methodist Church and the city of Snellville. The initial plans were to transform an abandoned supermarket into a new City Hall, and the now former City Hall into a segment of the church campus. After much negotiation and construction, on March 12, 2006 the city dedicated a newly constructed building that is Snellville City Hall.

In 1949, the city advertised for and hired a motorcycle policeman named Francis Bobb (aka "Sam Ketchum"). Sam was the sole policeman, managed the jail, and performed maintenance on the water system. On Jan. 27, 2011 the City dedicated a 30,000-square-foot building housing the police department comprising 56 sworn officers.