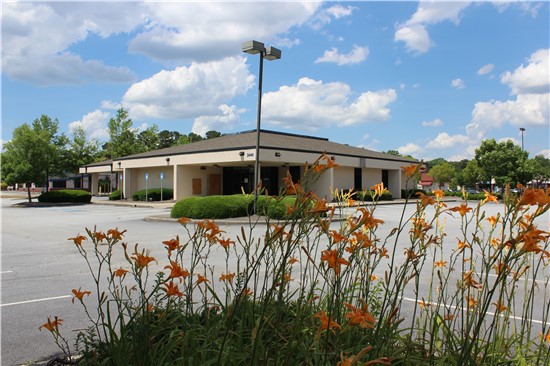 SNELLVILLE – The post office will move from its Oak Road location to the former SunTrust building at 2440 Wisteria Drive after the city and the U.S. Postal Service inked a deal Tuesday, in what is being called a "major win" for the city's eagerly anticipated Towne Center project.

"This is a historic day for the City of Snellville," Mayor Barbara Bender said. "We have been working on this deal for at least five years and saw it as a major piece in our goal of creating a Towne Center where residents can live, work, learn and play and making Snellville a destination for visitors. The city would like to thank the USPS for its help in making the Towne Center project a place we can all be proud of."

Mayor and Council approved the purchase of the vacant SunTrust building on Wisteria Drive at a called meeting in May. City leaders feel the access and parking around this building offers a significantly safer situation than the difficult parking and traffic pattern around the existing post office building. Negotiations also highlighted the fact the current post office contains a lot of unneeded space since mail delivery functions have moved to a new facility in Centerville.

Based on this new commitment by USPS, the city has reengaged with a committed developer to finish a development agreement to create the Towne Center on the block between Oak Road, Wisteria Drive, North Road and Clower Street. The Towne Center will provide the city's downtown with residential, educational, commercial and recreational properties surrounding a city market and new Elizabeth Williams Library already greenlighted following a signed agreement with the county last year.

The Towne Center will spur growth in the surrounding areas of the city, as outlined in the recently revised comprehensive plan.

"This is a major win for the Towne Center project," said Economic Development Director Eric Van Otteren. "The post office was one of the last major pieces of property the city needed to acquire to make this dream a reality. Through fruitful discussions with the USPS, we were able to strike a deal which will make room for more quality growth in the Towne Center for decades to come."

The city, through the Downtown Development Authority, purchased the former bank building in June. The post office will be located on the planned Towne Center greenway which will provide a pleasant walking and biking opportunity for Towne Center residents and visitors. City officials anticipate construction to begin on the greenway in early 2020.

The USPS now has 90 days to complete a review of the project which will include a public meeting, the date of which is to be determined. The project will go out to bid in October, according to a project timeline.

For more information and updates on the Towne Center project visit www.snellville.org/the-towne-center-snellville.