City of Snellville Breaks Ground on The Grove at Towne Center

Snellville, GA — The City of Snellville, along with co-developers CASTO and MidCity, is pleased to announce that Mid Cast Snellville has commenced demolition and broken ground on The Grove at Towne Center. The ceremony initiated The Grove's $85 million first phase, which is scheduled to begin to deliver in 2022.

The city of Snellville and Mid Cast team have been working for more than three years to plan and design the project. The groundbreaking event commemorated the first visible progress of the highly anticipated town center project. Attendees heard from key leaders of the project, including Mayor Barbara Bender, and witnessed a ceremonial groundbreaking. There was also a surprise presentation of a $500,000 donation from the Snell Family Foundation. A portion of the funds are expected to go toward a public art statue of City founders James Sawyer and Thomas Snell.

"We're ecstatic to begin visible progress on this long-awaited project," said Snellville Mayor Barbara Bender. "This is a momentous occasion for the City and its residents."

Snellville. The Grove at Towne Center's first phase will include over 50,000 square feet of retail, restaurant, office and entertainment space, and approximately 262 multi-family luxury apartments. In addition, the new Elizabeth Williams Library will be constructed and include a 2nd floor business development/accelerator space.

For more information and updates on the Grove at Towne Center project visit www.snellville.org/the-towne-center-snellville. 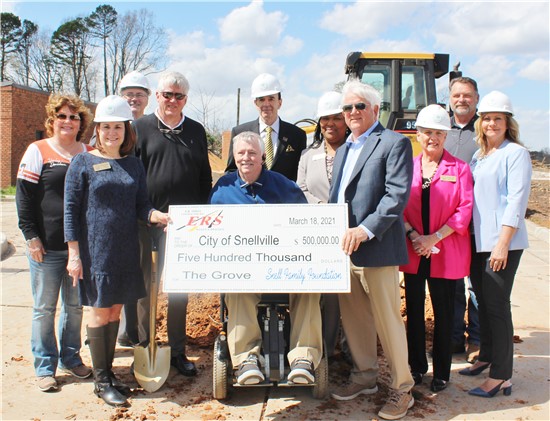 The Snell Family Foundation donated $500,000 to project. A portion of the funds are expected to go toward a public art statue of City founders James Sawyer and Thomas Snell.

CASTO, a fully integrated real estate organization since 1926, is a recognized leader in the ownership, management, acquisition and development of multifamily residences, mix-use properties, commercial shopping centers and office buildings. CASTO's growing portfolio currently includes more than 26 million square feet of commercial property and more than 5,000 residential units located throughout the midwestern and southeastern United States. CASTO is headquartered in Columbus, Ohio, and serves a variety of clients from five offices in Florida, North Carolina and Ohio. To learn more about CASTO, visit www.castoinfo.com.

Founded in 2009, Atlanta based, MidCity Real Estate Partners acquires, repositions, and develops office, and mixed-use properties. MidCity is known in the Atlanta market for their work on Alpharetta City Center, which was named a 2018 Development of Excellence for Exceptional Merit for Context-Sensitive Town Center Development, by the Atlanta Regional Commission. Through MidCity Realty Corporation, an affiliate real estate brokerage company, MidCity offers a full range of advisory services. MidCity is the successor company to The Griffin Company, a 35-year-old full service commercial real estate development and construction company headquartered in Atlanta, GA. To learn more about MidCity, visit www.midcitypartners.com.

Snellville's convenient Gwinnett County location, approximately 18 miles east of Atlanta and 45 miles west of Athens, has allowed it to prosper as a hub of commerce and retail in Northeast Georgia. Snellville's roots extend to 19th century London when two friends traveled to America and later started Snellville's rich history of commerce with stores of their own. Snellville is home to the award-winning Snellville Farmers' Market, a world class Veterans Memorial and one of the most decorated police departments in the state. Snellville is known for its dedicated volunteers and its celebrated diversity.